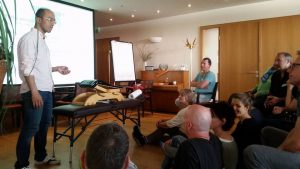 Dr. Tomo was raised in Anjo, Aichi Prefecture, Japan. His undergraduate degree is in Education from Nagoya University, and he received his Doctor of Chiropractic degree from Palmer College of Chiropractic in the USA.
He has clinical experience at the American Chiropractic Clinic in  El Salvador, Central America. He returned to Japan in 2008 and opened “MIKITOMO Chiropractic” (now Life Energy Station, MIKITOMO) with his wife, Miki, in Anjo, Japan.

Dr. Tomo was blessed with a good relationship since he was a student.  He has exchanges with the leading doctors in the world, and learned the essence. However, to the pursuit of essence, he  was keenly aware that there were limits to existing techniques and existing concepts. He found a way to look like people as “Energy body”, not as “matter” as before. He mastered FUCA-UZSHI, and officiated as a presidential of UZSHI association. At last he succeeded in breaking existing concepts. And now, he is rushing into the new frontier.

“Experience the fullness of health and happiness, and  full of our abilities and our talents. Let your real life be true! “
He has been evolving dramatically every day.
“Human ability explorer who continues evolving.”

Since he was a child, he had a lot of interest in mind and body. It is probably because he spent so much time and energy doing sports, including baseball from elementary school to high school and being absorbed in American football at university. He was thinking about how to use the body better, how to prevent injury in training, what to eat and how strong the body will be everyday. It was his hobby to read books on practice, training and psychology, record forms of top players in videos, and repeatedly see and study. From childhood, it seems that he strongly wanted to know the real thing, want to learn the real thing, want to practice the real thing.

He used to injured. Practice severely pulls itself out as the level goes up. Since reinforcement and injury are simple paper, delicate body sensation is necessary to prevent injury in advance. However, for inexperienced injuries, it was difficult to perceive something strange.

From his teens to about mid 20’s, Dr. Tomo experienced various physical and psychological problems, extreme insomnia and a decrease in living energy. He learned a lot from his own experiences, such as things you did not understand the cause, things that were clearly understood, things you found after 20 years passed.

Thus in the process of face to face with his life every day, he got intuition that:
“I wanted to work to save people’s health, I was born for that purpose”

Pursuit of chiropractic in the real American

After graduating from Nagoya university, he learned chiropractic at Palmer College which was the birthplace of chiropractic, going to the real home of chiropractic with the thought that “ I want to pursue genuine things which make a person intrinsically better”. Although studying in English at school was difficult, he was blessed with many wonderful encounters from my school and he spent his blessed days. Whenever he got time, he visited the doctor’s office which was said to be the ultra first class nationwide, and deepened learning.

In Palmer College, he was fascinated by Gonstead technique and he was devoted to learning. Gonstead technique is an old technique in chiropractic history, and it is an approach that finds problems of the nervous system by visualization, palpation, spinal temperature difference detection, x-ray analysis, etc., and adjustment. He was able to gain experience while working as an intern at the clinic of Dr. Troxel, an authority of Gonstead technique.

Shortly after the start of business, the circle of introduction will spread widely. Many people came to visit in their office like hideout without leaflets, homepages, nor noticeable signboards. There are some people from outside the prefecture and from overseas far away. Many of them are said to have been unknown, even if they went to the hospital, said they would not get over it, and people who had traveled through numerous treatment halls.

However, the more the experience and learning, the clearer the gap between the ideal he was  imagining and the reality, and the unwelcome wall stands out.

The wall is that we looked at human beings as “body = matter”.
Humans are the following;

It tends to pay attention to the visible “Body / Matter”
The Lord is “Life = Energy (life)” .
“Flesh” is a substance, it does not move or change by itself.
If you are trying to make “physical” essentially better, you need to improve the “Energy” which is the main.

Dr. Tomo felt that chiropractic which he had believed that he had learned the world’s best things, was out of essence. Even if the client in front of him was pleased, if he was doing something out of nature, he would be painful and distressing. He got hard time to do the same procedure which he had continued for his ten years career. He experienced that his hand was cramped when he was trying to adjust which he had repeated for many years.

On the contrary, when it was confirmed that the thing that he thought that it was the best thing was not the best thing, and Dr. Tomo was confident that he could evolve and grow still more, a sense of aspiration and exhilaration came up.

In 2014, Dr. will learned FUCA-UZSHI under Mr. Keisuke Fujibuchi. Dr. Tomo served as president of the UZSHI association for two years and went to teach as a seminar lecturer to Germany for five times. In 2017, he started his own school to teach his method.

And in 2018, they launched insane of the new era, Spin Synchro Switch, making full use of the physical laws of the universe. Dr. Tomo is active on the Earth as a center to bring out 350% of the potential of earthlings.

Top Page
About Our Technique
About Our Seminar
MAIL: mikitomodc@gmail.com
Facebook: Tomohide Iida